For a few hours last night over seventy-five individuals gathered in the park at the corner of 47th and Broadway near the entrance to the Plaza in Kansas City to demonstrate against Nazis and racism and in support of the people of Charlottesville, Virginia.

Pro tip: if you’re driving in slow city traffic resist the urge to yell a challenge to a large protestor on the sidewalk carrying a sign at the exact moment the traffic light turns red.

There were many more supportive passersby:

An expression of support.

After all, this is Kansas City. 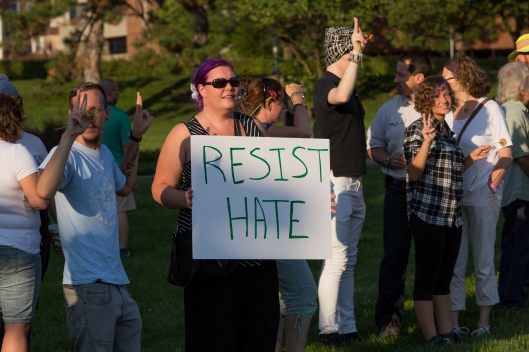 When people who aren’t Nazis march without tiki torches in broad daylight in Kansas City (August 12, 2017)

Jason Kander‏ @JasonKander
Despite what @realDonaldTrump says, there are not many sides to this. There’s good and evil, and he refused to take a stand against evil.
[….]
2:50 PM – 12 Aug 2017

If you’ve ever wondered what you would do when faced with evil, now is the time.

In case you haven’t heard yet, Representative Eric Cantor (r), the number two republican in the House leadership, lost his primary to a teabagger:

it’s the biggest blow to the GOP establishment in years. Whole network of DC Rs have been wired into Cantor, prepping for when he got gavel 7:47 PM – 10 Jun 2014

That’s a feature, not a bug.

There is no length you can go to on your right to protect yourself, House Republicans, no show of opposition showy enough. So maybe govern? 7:51 PM – 10 Jun 2014

As a former resident of VA, I still follow state politics there.  Being a political junkie adds to the interest.  As such, watching Creigh Deeds massively bungle a campaign, even in an off-year election, struck me as something we’re seeing develop in slow motion right here in Missouri.

Yes, that slow motion possible train wreck takes the form of Senator McCaskill.  Because in many ways, the states are similar in terms of red/blue voting patterns and the urban/rural divide and as such, we can learn much by what just happened.

By statewide Democratic standards, Claire’s victory over (no)Talent in 06 was a landslide but that in itself reflects how hard it is to get Dems elected to statewide, particularly Federal, office.  If you face a seriously untalented, party hack while heavily backed financially by the national Dem party and still manage only a 2% margin of victory, what does that tell you?  Other than the state is far redder than most commentators care to admit?

It’s clear that it told Claire to play to the right, never make a politically tough choice that might cost her votes from people outside the party and always try to couch much of what she does in some veneer of bipartanship.

What Claire should take from the VA race is that the Dem base in Missouri elected her.  Her campaign figured out that by getting enough rural Dems to the polls (like me), it would be enough, along with the urban strongholds, to put her over the top.

And yet, here she is, halfway into her first Senate term and she’s Creigh Deeds in slow motion. Only now, we have an actual record to point to showing how, step-by-legislative-vote-step, she’s pissing away base votes:

1) Bipartisanship at best or voting like a Repup at worst.  FISA is just one example.  Her waffling on health care reform is another.  Whatever Dem principles Claire might have had, I sure as hell haven’t seen em in the last three years in that on every core Democratic issue vote, she votes with the Republicans.

2) Look at the waffling on health care reform.  Sounds pretty Blue Doggy to me.  Golly, how…corporate.  Claire, rural Dems hate corporate.  They might turn the other way on something like your FISA vote since most people out here don’t see that as impacting on their daily lives.  But if they see you as a corporate tool?  Forget it.

3) Do you remember why you were elected?  I know that some cynical Dems saw your campaign platform as nothing more than “I’m not Jim Talent”.  Those cynical Dems were right.  The base, yunno, those people that came out of the woodwork to work for you and give your campaign money, invested a crapload of hope in what you might accomplish in the Senate.  Your early hopping on the Obama bandwagon helped fuel that perception despite an already poor voting record on core Democratic issues.  In the year since Obama was elected, you’ve reverted to form.

So, what should Senator McCaskill have learned from the VA gubanatorial race?

Continue on the above course and SHE WILL LOSE VOTES.

To paraphrase Markos over at the Great Orange Satan:  we’re not coming out to vote for you simply because you’re a Democrat or if other state Dems or national figures tell us how important you are in moving forward a liberal agenda in Congress.  If you’re bold and decisive (not two adjectives one normally puts in the same sentence with Claire), not only will we turn out, we’ll do our damndest to get others out.  Plus, we’ll give money and time to ensure you get reelected.

The base got you elected, not Missouri’s Republiclans who, as a lot, would rather wake up one morning to find themselves turned into African-American Muslims rather than vote for any Democrat no matter how many times you vote the Republican party line on core Democratic issues.

Here are links to three items that might interest you:

There’s a thirty second ad called “The Grinch Who Stole SCHIP” that’s funny and that vividly makes the point about George W. Grinch.

The Monday Post-Dispatch pretended to ask a number of Missouri power players to answer Virginia’s question about whether Santa Claus is real, then the P-D writer put more truth into their mouths about their beliefs than they would ever dare speak. My favorite:

Of course there is a Santa Claus. But thanks to environmental policies I’ve supported, the North Pole is melting, and he’s got to learn to swim. Since I believe that waterboarding is really like training for a swim competition, I say we tie him up and find out what he knows.

This last one isn’t Christmassy, but Gone Mild curls its lip eloquently at CAFOs and at Chris Koster for having sold himself out to Big Ag:

I’m no PETA member, but even I don’t like the idea of eating something that has spent its entire life jammed in a stinky stall like the most crowded and flatulent elevator you have ever imagined.

Setting aside any porcine pity or tenderness for tenderloins, though, CAFOs are huge canker sores on the environment. They pollute ground water with unimaginable quantities of pig feces and urine. Their smell can make your eyes water, or worse – airborne micro-particles of pig feces can pollute entire zones of beautiful Missouri countrysides.