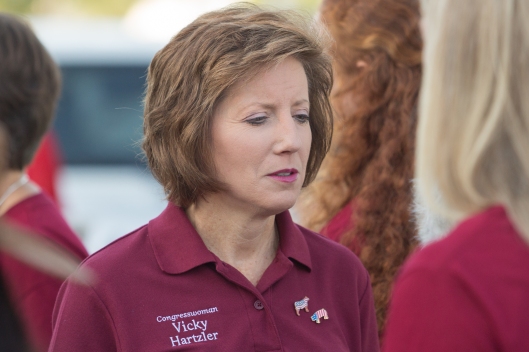 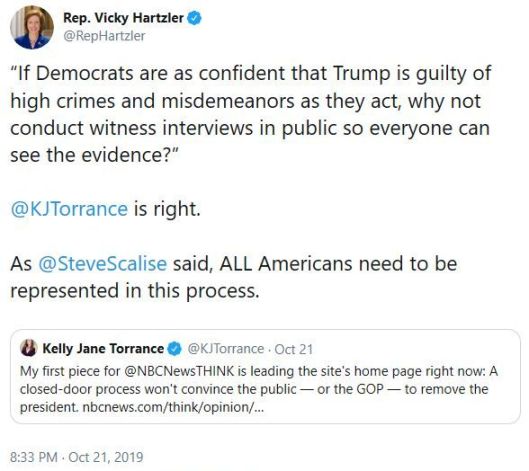 “If Democrats are as confident that Trump is guilty of high crimes and misdemeanors as they act, why not conduct witness interviews in public so everyone can see the evidence?”

This is your first Presidential impeachment, isn’t it?

Here’s a question. Do you think it’s legal to shakedown a foreign government, denying them already appropriated and badly needed military aid, while pressing them to manufacture dirt on one of Donald Trump’s political opponents?

There was much hilarity in the responses:

They will, Vicky. But you know that.
And even if the witnesses were being interviewed in public, the R House changed the rules in 2015 prohibiting the minority from calling witnesses. Live with that. We did.

Where have you been? That has been repeatedly explained.

Clinton’s impeachment became public after a private inquiry, as will Trump’s. I’m not surprised you ignore history to make your point but be honest w #Missouri that your objection is all political bullshit. Constituents count on you not to lie so much.

I’ll explain it to you Vicky, if impeached but the house, there will be an open trial in the senate, got it?

Of course, that is not how *investigations* are conducted…trials, yes, but not investigations. Your side, the pro-trump/pro-Russia side, will get to ask questions during the Senate trial. When did the GOP sell out?

ALL Americans will be if articles are drafted. In what other arena are investigations carried out in full view of the public and suspect?

“Suspect.” Heh. Nah, he admitted it in font of cameras that were recording.

You know the answer. Or you don’t. In which case how the hell did you get elected?

If Trump is so confident of his innocence (at this point, you have to include senior cabinet level officials too), why not cooperate? Why block witnesses? Why ignore subpoenas?

Maybe you have a granddaughter or grand niece or some 5th grader in your life that can explain these things to you. I know the #Constitution can be hard. The president is having a real tough time with the “phony” parts today. #EmolumentsClause #ImpeachTrump

Donald Trump, not smarter than a fifth grader.

Okay, I think they are punking you. There are actually Republican members of Congress participating in these hearings. Be patient, these are “depositions”. Look that up. They are Never taken in public. C’mon, think for yourself.

This is all smoke and mirrors from the gop. You know what is going on, but you choose to deceive your constituents. All Americans will be presented with evidence. Hell, he’s done so much in the public eye on national tv you would be screaming for his head if he was a democrat.

Because criminal investigations aren’t carried out in public, genius.

When you are a witness or a participant in a crime and are interviewed by the police, you get your lawyer but Don Vito Trumpini does not get to send his. The Rs are in the room. Stop misleading your constituents. Focus on the substance. The facts stink.

If you’re so open to transparency, why not publicly demand the release of Mueller grand jury materials?

I mean the police have to inform the people they are investigating of all the things they…oh wait that’s not how any of this works is it?

A grand jury is done in private as you know

Oh, you’ll get a public hearing. Keep deflecting until then.

Why are you so against this Republican instituted process? If it was good for Benghazi-why not now? There are as many Republicans in these depositions as Democrats. They’re depositions-not interviews!

Seems you jumpy GOP types have been criticizing Dems for holding public hearings that might reveal privileged info yet now you’re all pissy because they are private?!?! Ffs, why not have the DNC praise Trump so you’ll impeach him to own the Dems?!?? Unamerican imbeciles..

That’s unfair. America has a long history of imbeciles.

JFC, Vicky, it’s like you don’t have any fucking integrity at all. They’re gathering evidence. You know, like in a grand jury. Which is also not open to the public. If you don’t know anything about upholding laws or the Constitution, what are you doing in Congress? #hypocrite #FU

Do you get paid when you repeat the same sad talking points? Do you intend to ride the Trump train off the cliff?

OMG, I needed that laugh.

She said, conduct witness interviews in public. Too funny.

Congresswoman, have you ever known of a meth addict in your employ? Do you drug test farmhands?

And that is why witnesses are not questioned in public. Umkay?

Why keep lying, @RepHartzler ?You know depositions aren’t done in public, but committees r bipartisan. Don’t u trust the @GOP members in committees.If this was done as in Nixon & Clinton, a Grand Jury would have been convened, but as we all know, #Barr protects Trump, not country

The trial in the Senate will be public. Stop being so disingenuous, Mrs. Hartzler.

You’re not very bright are you?

When the GOP. Newt and Lindsey open an impeachment inquiry into Clinton it was only after the Starr investigation, that was done in secret, including a grand jury. So stop the nonsense. This is part of the investigation, hearings will follow. Campaign Finance: “Do you like subpoena coladas and getting caught in Ukraine?” (October 10, 2019)