It’s in the Constitution somewhere. 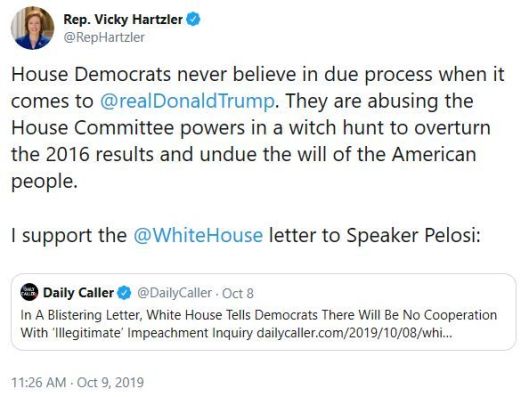 Rep. Vicky Hartzler @RepHartzler
House Democrats never believe in due process when it comes to @realDonaldTrump. They are abusing the House Committee powers in a witch hunt to overturn the 2016 results and undue the will of the American people.

There was much hilarity in the response:

Did you forget about 2018? Or does that election not count?

So, you think the president is above the law?

Of course you do. You guys have amazing mental gymnastics when it comes to justifying what trump does but are amazingly rigid to often made up rules for democrats.

You do realize we’re on the verge of losing the cold war, right Vicky? This isn’t about process, this is about country.

Didn’t the Cold War end in 1991 when the Soviet Union dissolved? What am I missing?

“Россия” (Russia) – a variant of the Russian presidential flag.

I mean, considering that you support dead Kurds and caged kids, I can’t imagine that this comes as a big surprise to anyone.

I don’t know why I’m commenting since you ignore us all anyway. This is not to overturn results of a prior election. This is to prevent Trump from further damaging our country. (And FWIW, the will of the majority of the American people in 2016 was not to elect Trump).

House Democrats believe in the rule of law. Unlike the Republican party that has thrown the Constitution out of the window. Our country is in trouble and all you can do is look the other way while it’s looted and burned to the ground. This is insanity!

Clinton underwent an impeachment inquiry for lying about a blow job. This Orange Fool said on television, multiple times, that he’d like foreign governments to investigate political rivals. So much for checks and balances. So much for democracy. Why do you hate democracy Vicky?

You are a literal fascist.

You do know the “will of the people” voted for Hillary, right? Did your male handlers not teach you how to use that googly internety searchy thingy?

you are an embarrassment and should resign.

Then you have sold out too. The letter is entirely legally unfounded. Shame on you for putting your name on such nonsense

You support the traitor in the White House, yeah, no big surprise. You support him robbing the taxpayers blind, his racism, his corruption, asking a foreign government for election assistance, ignoring check and balances & rule of law.

You support him slaughtering the Kurds too?

RepHartzler please stop the bs !
Care about the constitution and the country instead of your party line!

You know that’s not true

You support a murderer for hotels! Screw you and your ideals!

Do you really believe the bs you tweet? Such hypocrites you are.