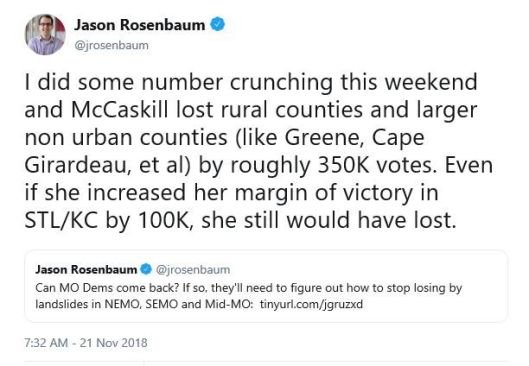 Jason Rosenbaum @jrosenbaum
I did some number crunching this weekend and McCaskill lost rural counties and larger non urban counties (like Greene, Cape Girardeau, et al) by roughly 350K votes. Even if she increased her margin of victory in STL/KC by 100K, she still would have lost.
[….]
7:32 AM – 21 Nov 2018 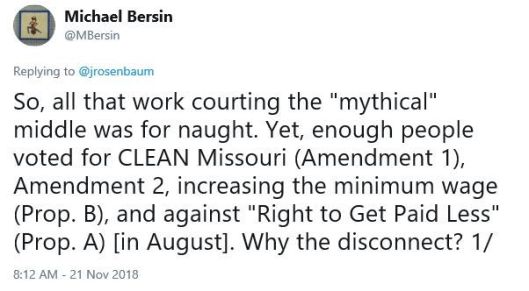 Michael Bersin @MBersin
So, all that work courting the “mythical” middle was for naught. Yet, enough people voted for CLEAN Missouri (Amendment 1), Amendment 2, increasing the minimum wage (Prop. B), and against “Right to Get Paid Less” (Prop. A) [in August]. Why the disconnect? 1/
8:12 AM – 21 Nov 2018 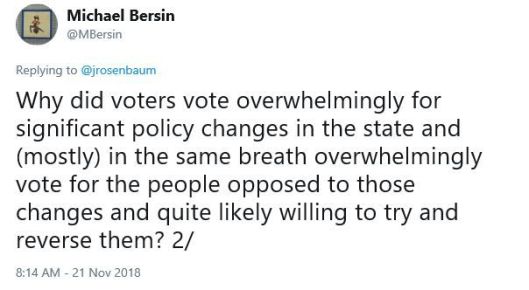 Michael Bersin @MBersin
Why did voters vote overwhelmingly for significant policy changes in the state and (mostly) in the same breath overwhelmingly vote for the people opposed to those changes and quite likely willing to try and reverse them? 2/
8:14 AM – 21 Nov 2018

Jason Rosenbaum @jrosenbaum
This is just my opinion but: the pro-Clean MO and anti-Prop A campaigns were significantly better organized/funded than their counterparts. And there was no organized opposition to min wage.
8:24 AM – 21 Nov 2018

Michael Bersin @MBersin
Their opponents were spending their money elsewhere, in places where they knew they will be able to do significant damage to those initiatives in the future.
8:35 AM – 21 Nov 2018

There’s more, on another thread:

Jason Rosenbaum @jrosenbaum
Replying to @Tyson_Pruitt
Yes, that’s my point. Dems cannot lose rural MO by <300K. Galloway lost those same counties by around 190K and her performance in suburbs/exurbs and STL/KC was good enough to win.
7:45 AM – 21 Nov 2018

Jason Rosenbaum @jrosenbaum
Well, I was going to add to that Tweet that you can’t expect future GOP downballot candidates to spend less money than a STL aldermanic candidate.
8:32 AM – 21 Nov 2018

But, then again, what do we know?

Jason Rosenbaum is leaving his gig as the in-house blogger for the Columbia Tribune. I don’t link to him much, but he was definitely a daily read and will be missed.

Strangely, his departure announcement clears up a misconception I had on Twitter, where I thought I was following a different Jason Rosenbaum altogether. I didn’t find out my mistake until today, a couple of months of Twitter updates later. Weird.