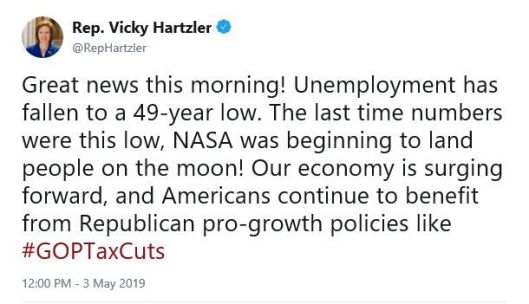 Rep. Vicky Hartzler @RepHartzler
Great news this morning! Unemployment has fallen to a 49-year low. The last time numbers were this low, NASA was beginning to land people on the moon! Our economy is surging forward, and Americans continue to benefit from Republican pro-growth policies like #GOPTaxCuts
12:00 PM – 3 May 2019

Back then NASA was beginning to land people on the Moon? And what are we doing now?

Our economy has been steadily improving since 2009.

The unemployment decrease is due, in large part, to a declining workforce.

Wages are stagnant. Purchasing power hasn’t changed since the 60s.

As usual, no mention of wages. Doesn’t matter if you have a job when it doesn’t pay the bills. Congrats on your pro-poverty agenda.

Having to work 2-3 jobs in order to survive is Not a great economy.

I seem to recall Republicans swearing that low unemployment numbers were a false metric that didn’t take into account people who stopped looking for work while Obama was in office, Congresswoman.

That would be the difference between U-3 and U-6, right? Table A 15: Alternative measures of labor underutilization

Didn’t Trump call the unemployment rate a hoax when Obama was President? You’re a hypocrite bigly.

So, when is the next open public town hall in the 4th Congressional District? Just asking.

Missourians are enterprising people. We don’t need the govt to create jobs. We’ll create jobs if govt will move over. #RoyBluntBusTour

Before we let Mr. Blunt get away with this, there are a few inconvenient facts that he needs to explain.

As of December 2009, Missouri’s unemployment rate was 9.6%, very close to the highest ever recorded rate of 10.3% in 1983. That miserable statistic, of course, is the result of the deepest national recession since the great depression, brought to us, as all honest economists agree, by the tax and regulation cutting GOP. The lowest unemployment rate recorded in Missouri was 2.3% in 2000, under the liberal Mel Carnahan, during the last years of the liberal Clinton administration.

When Roy’s son, little Matty, ascended to the Missouri statehouse, he along with his Republican legislative enforcers in Jefferson City brought unemployment to highs of 6-8%. Doesn’t actually inspire confidence in Mr. Blunt’s grandiose claims about what he and his anti-government fellow travelers can achieve, does it?

Of course, there’s also the inconvenient fact that government interference in the form of the stimulus, maligned as it is by good old boys like Roy, probably saved our goose – even though it’s still a skinny old bird. The question is whether or not the likes of Roy Blunt, touting their failed economic theology, are the people to fatten the goose back up and give us some of those golden eggs.