My money’s on Wendy Baird.

A mom got so fed up with Donald Trump’s decision to separate children from their families at the border that she took to social media to see if fifteen or so friends would join her in front of Senator Roy Blunt’s (r) office at Tenth and Walnut in Kansas City to express their concerns. That was on Monday. By this morning over four hundred individuals expressed their support and over one hundred people joined Wendy Baird in front of the building entrance at 10:00 a.m. 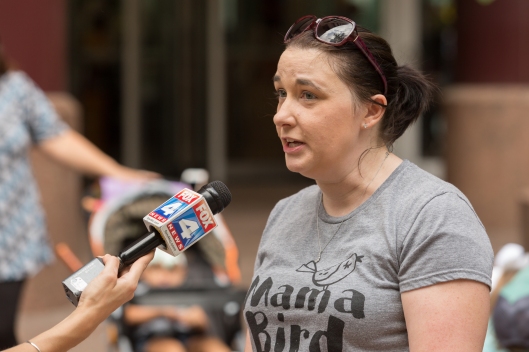 Show Me Progress: …Why did you come here today?

Wendy Baird: We are here to ask, uh, Senator Roy Blunt to encourage President Trump to make one phone call to Home, to the Department of Homeland Security. It’s his cabinet member, he can ask her to stop this at any time. And that’s what we want him to do.

Show Me Progress: Uh, again, why you?

Wendy Baird: I’m just a thirty something stay at home mom. I had to do something. it broke my heart to hear about these poor kids. We know it’s traumatic for children to be in any kind of situation like that. It’s not good for them. it’s not good for their hearts, it’s not good for their brains, and there’s no reason for it. Um, no other administration would touch this with a ten foot pole. Um, but we’re doing it and apparently we’re all in. And we need to stop.

Show Me Progress: So, what was the reaction of people who you know as you started to organize this?

Wendy Baird: Um, they were fully behind it. Not everybody could come today. I understand, it’s ten o’clock on a weekday morning. Um, but we’re still gonna have a really good group I think. And those who couldn’t be here, they’re calling, they’re emailing, they’re contacting Senator Blunt and that’s, that’s all we can do.

Show Me Progress: How would you characterize, those, they people you know, as you’ve communicated with, their reaction to this?

Wendy Baird: I, I think so. I think it is pretty universal. Um, like two thirds of the country are against separating families. I don’t think it matters if you’re a Democrat or a Republican, it’s not who we are. We can do better. We don’t need to separate children from their families.

Building security and Police inside the building entrance.

Prompted by one hundred or so moms and their kids (and a few grandparents, too, probably)?

Since they couldn’t go up to Senator Blunt’s (r) office they spoke to two of his staff members who came down to listen to them. People were insistent, refused to accept bland assurances, and didn’t back down. Speaking to Senator Roy Blunt’s (r) staff outside his office.

In Missouri we’re used to plain speaking people from Independence. You’d think Roy Blunt (r) would get that.