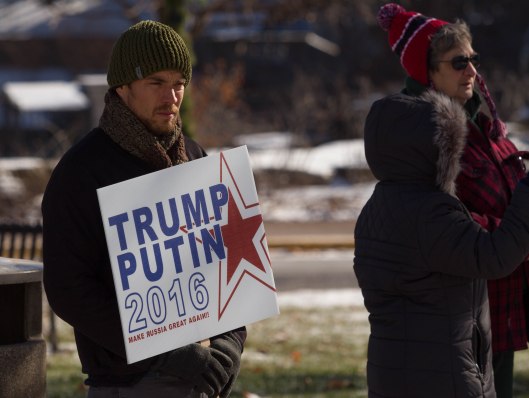 Donald J. Trump ‏@realDonaldTrump
The United States must greatly strengthen and expand its nuclear capability until such time as the world comes to its senses regarding nukes
10:50 AM – 22 Dec 2016

We’re gonna need that ten bar blast shelter with EMP shielding and NBC filtration finished within the next thirty days.

20 Lessons from the 20th Century on How to Survive in Trump’s America
A history professor looks to the past to remind us to do what we can in the face of the unthinkable.
BY Timothy Snyder

[….]
1. Do not obey in advance. Much of the power of authoritarianism is freely given. In times like these, individuals think ahead about what a more repressive government will want, and then start to do it without being asked. You’ve already done this, haven’t you? Stop. Anticipatory obedience teaches authorities what is possible and accelerates unfreedom.
2. Defend an institution….
3. Recall professional ethics….
4. When listening to politicians, distinguish certain words….
5. Be calm when the unthinkable arrives….
6. Be kind to our language. Avoid pronouncing the phrases everyone else does. Think up your own way of speaking, even if only to convey that thing you think everyone is saying….
7. Stand out. Someone has to. It is easy, in words and deeds, to follow along. It can feel strange to do or say something different. But without that unease, there is no freedom. And the moment you set an example, the spell of the status quo is broken, and others will follow.
8. Believe in truth. To abandon facts is to abandon freedom….
9. Investigate. Figure things out for yourself….
10. Practice corporeal politics. Power wants your body softening in your chair and your emotions dissipating on the screen. Get outside. Put your body in unfamiliar places with unfamiliar people. Make new friends and march with them.
11. Make eye contact and small talk. This is not just polite. It is a way to stay in touch with your surroundings, break down unnecessary social barriers, and come to understand whom you should and should not trust. If we enter a culture of denunciation, you will want to know the psychological landscape of your daily life.
12. Take responsibility for the face of the world. Notice the swastikas and the other signs of hate. Do not look away and do not get used to them….
13. Hinder the one-party state….
14. Give regularly to good causes, if you can….
15. Establish a private life. Nastier rulers will use what they know about you to push you around. Scrub your computer of malware. Remember that email is skywriting….
16. Learn from others in other countries. Keep up your friendships abroad, or make new friends abroad. The present difficulties here are an element of a general trend.  And no country is going to find a solution by itself. Make sure you and your family have passports.
17. Watch out for the paramilitaries. When the men with guns who have always claimed to be against the system start wearing uniforms and marching around with torches and pictures of a Leader, the end is nigh. When the pro-Leader paramilitary and the official police and military intermingle, the game is over.
18. Be reflective if you must be armed.
19. Be as courageous as you can….
20. Be a patriot. The incoming president is not. Set a good example of what America means for the generations to come. They will need it.
[….]