Mid-Continent Nail is located in Poplar Bluff, Butler County, Missouri. The company has been severely affected by steel tariffs imposed by the Trump administration. 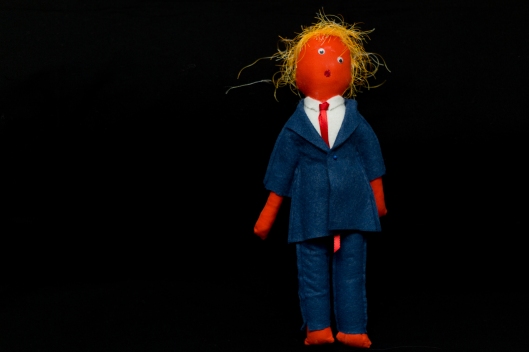 In 2016, via the Missouri Secretary of State web site:

State of Missouri – General Election, November 08, 2016
Official Results
As announced by the Board of State Canvassers on December 12, 2016 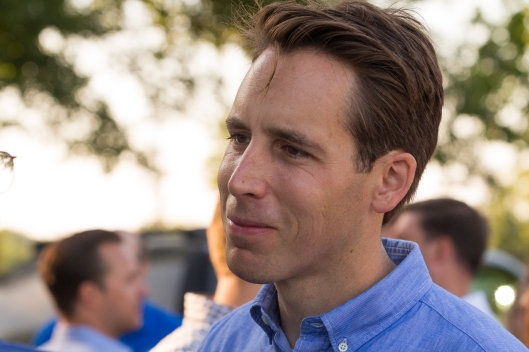 In 2018, via the Missouri Secretary of State web site:

State of Missouri – General Election, November 06, 2018
Official Results
As announced by the Board of State Canvassers on November 30, 2018

Today, in The New Yorker: 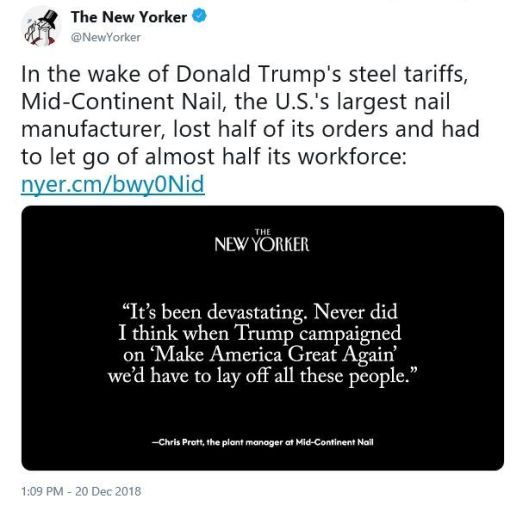 The New Yorker @NewYorker
In the wake of Donald Trump’s steel tariffs, Mid-Continent Nail, the U.S.’s largest nail manufacturer, lost half of its orders and had to let go of almost half its workforce:[….]
1:09 PM – 20 Dec 2018

A few of the comments

This kind of ignorance is confusing to all the people who issued constant warnings about tariffs.

This is in my home state. The kicker? In interviews, laid-off workers still support trump. I guess they’d rather see the jobs disappear than have them “taken” by the fearful army of brown people, who they’ve been taught to see as the real enemy.

I hear there will be coal mine jobs!

Losing their jobs to own the libs. It’s 7D chess! #maga #winning /flex

Literally only 1 interviewee regretted being conned, and apparently bc their child’s life is at stake. It’s still not real enough for the other marks.

‘I never thought leopards would eat MY face,’ sobs woman who voted for the Leopards Eating People’s Faces Party.

“never did I think” says it all. A lot of people didn’t think. And still don’t.

Anybody who believed the words of a decades old NY con man deserves no pity. The workers I feel sorry about.

NYers have known the Orange Menace is a POS for decades. Did anyone listen?

When you vote out of ignorance this is the results

So in one breath he says people will think he’s just a dumb hillbilly who voted for Trump and in the next breath he affirms it.

So these people are going to lose their jobs, then their houses and still vote for Trump?

JFC, these people need to be de-programmed like yesterday.

So you just knew that he would be a horror for the vast majority of the country, but you are all shocked and bothered that his shit actually affected you?

Why is the media still writing these dumb ass articles. The people are unconcerned with the job losses, so why should we be?

Oh well I bet most of those people voted for trump so no sympathy from me. Enjoy working at Walmart for a fraction of your original salary with no benefits. But you still have your guns and bibles. Winning! Own those libs!

“…’Right now we’re counting on [U.S. Senator-elect] Josh Hawley [r], who says he has a good relationship with President Trump, to save the five hundred jobs in Poplar Bluff, Missouri’….”

You keep believing that.