The Post Office is in the U.S. Constitution, in case you were wondering.

And, for this election: 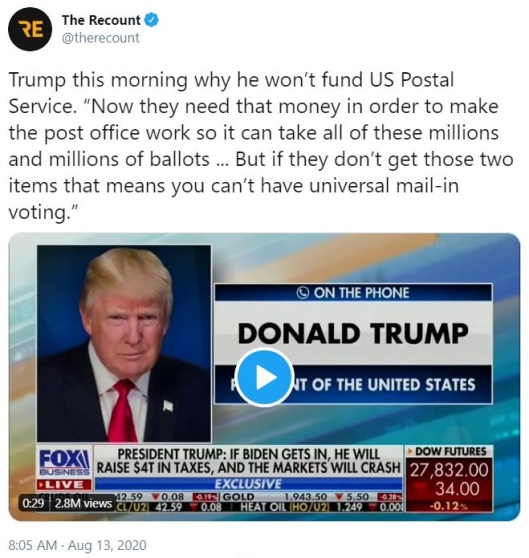 The Recount @therecount
Trump this morning why he won’t fund US Postal Service. “Now they need that money in order to make the post office work so it can take all of these millions and millions of ballots … But if they don’t get those two items that means you can’t have universal mail-in voting.”
[….]
8:05 AM · Aug 13, 2020

This postcard, from the U.S. Postal Service, arrived in the mail a few days ago:

A little pre-post-election spin there.

We received the text of a letter to the editor from the writer (via e-mail):

Recently I signed a petition asking Mrs. Hartzler to support the United States Postal Workers, save 6-day delivery service plus save the jobs of these workers by voting for House Bill 1351.  It was evident when I received her response this last week that either she didn’t read the petition or she just doesn’t understand the problem.

Mrs. Hartzler’s letter said the rise of technology has led to a decrease in the volume of mail the post office processes and this is why they are losing money.  Not true.

It’s not losing billions of dollars a year because of a rise in technology, as Mrs. Hartzler contends.  The problem facing the USPS was caused by a 2006 Congressional mandate made during a lame-duck session of Congress that, in short, requires the USPS to fully fund their retiree benefit accounts for the next 75 years and do so by 2017.  That means that they have to fully fund the retirement benefits for future workers, some who have not even been born yet.  Have you ever heard of a business having to fully fund anything for the next 75 years?

The USPS could actually be making a profit – more than $611 million in the last four years – sorting and delivering the mail.  But, because of these pre-funding payments, the USPS has posted a $20 billion loss since 2007 because they have to pay $5.5 billion every fall into an account for the future.  This $20 billion comes out of their operating budget and accounts for 100% of the USPS’s red ink since 2007.

Without the mandated 75 years of funding, those retirement accounts would be “overfunded” by about $80 billion.  Congress won’t even allow the USPS access to this overfunded money, money that belongs to the USPS.  This is not taxpayer money.  This is money that has been overpaid by the postal workers into the USPS retirement benefit accounts.

Mrs. Hartzler doesn’t seem to understand this. She hints to something called “a solvency authority that would have a broad statutory mandate to reduce Postal Service expenses.”  Cutting spending isn’t going to solve the problem.  It would only lead to mail not being delivered on Saturdays, closing rural post offices, raising the cost of a stamp and the loss of jobs for many of our local mailmen and women.

Spending isn’t the problem.  The 2006 Congressional mandate is the problem.  Without that, the post office would be doing just fine.  The solution seems simple.  Reverse the mandate.

And Congresswoman Hartzler should read her mail before sending out a mass-produced letter that doesn’t address the issue raised in the correspondence sent to her.  It makes it look like she just doesn’t get it.  But then again, maybe she just really doesn’t get it.

Does anyone think voters in rural Missouri will be pleased that they’ve lost their local post offices?

The letter also appeared in the November 25th edition of the Cass County Democrat Missourian.