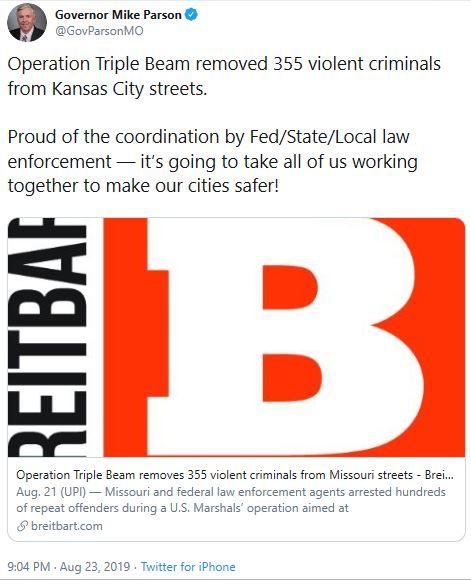 Proud of the coordination by Fed/State/Local law enforcement — it’s going to take all of us working together to make our cities safer!
[….]
9:04 PM · Aug 23, 2019·Twitter for iPhone

Well, I guess tweeting a Breitbart article is a bit more subtle than the pointy white hood.

It concerns me that the governor believes Breitbart is a good source.

Breitbart? Really. How embarrassing for us Missourians.

Posting from a site known for white supremacy and sexism? Validating them as a news source? Disgusting.

Breitbart?? You’ve got to be kidding. #showmeabettermo

Quoting this speaks volumes about your policies and politics. What a shame for my beautiful home state of Missouri.

Why does it surprise me that you are retweeting Breitbart? It shouldn’t, but it does. I thought you were better than this. Shameful.

Breitbart?? Are you kidding me? As governor, you should be seeking out various sources and using common sense. I’m beginning to think you’re more off the wall than Hawley and Greitens combined.

Breitbart? Really? How is it that you people are voted into public office?

You’re tweeting out articles from a white supremacist website

Many Missourians will remember Dana Loesch from her days in St. Louis. A former “mom” blogger for the St. Louis Post-Dispatch, she moved into conservative political radio and rode the St. Louis Tea Party bandwagon into minor rightwing media celebrity with a short stint as a commentator on CNN. Loesch worked for Breitbart.com before the death of Andrew Breitbart and continued there for a year under the leadership of Steve Bannon, Breitbart’s successor, the head of Donald Trump’s campaign and, most recently, his newly appointed chief strategist. She knows the guy up close and personal.

Loesch really despises Bannon. She sued to break her contract with Breitbart.com after Bannon took over, alleging “basic ideological conflicts” and an “increasingly hostile” workplace. She describes the year she worked under his leadership as “one of the worst, most hellacious years of my entire life.”

Just to give you some context, Loesch is a far rightwing conservative and her salvos are usually aggressively mean and snarky, usually couched in an “I’m just to cute for words” style. Civility is not her forte – she’s the character who, on the topic of soldiers urinating on dead Taliban fighters, announced that she’d like “to drop trou and do it too.” A natural Trumpette, in other words.

But Loesch’s mean-minded wit doesn’t mean that she approves of the new enabler of Trump’s id. In August she reacted to Bannon’s role in the Trump campaign hyperbolically exclaiming that “one of the worst people on God’s green earth was just instituted as the chairman and CEO of the Trump campaign.” Her reaction to Bannon’s appointment as Trump’s chief strategist was equally horrified:

Dana went on to explain that this position is a position of service to the voters and to the country, and because of this, is not a good place for a man like Bannon to be.

So why is Loesch so hostile? Could it be Bannon’s cultivation of the racist alt-right? Maybe. I paid attention to Loesch when she was in St. Louis, frequently writing about her latest antics, and, Tea Party doyenne though she was, she never struck me as a person who condoned personal racism.

Loesch has mentioned ideological differences. Her recent comments about Bannon’s vindictiveness and egoism align with comments made by another disillusioned former Breitbart.com staffer, Ben Shapiro, who paints a dispiriting – and well-worth reading – discussion of Bannon’s modus and motives.

Loesch may be a hectoring ideologue, but she is not a stupid person and this time she is almost certainly correct. Bannon is a danger to the country. Like Bush with Carl Rove, the dim-witted Trump may have found himself a brain. But Bush’s brain was simply corrupt, Trump’s is likely diseased.

It took a while. A release from the University of Missouri – St. Louis:

Posted on May 9, 2011 by the UMSL Chancellor Tom George and Provost Glen Cope regarding the institution’s Labor Studies Program:

We have finally completed viewing the videos originating at the University of Missouri-Kansas City (UMKC) from the UMSL course Introduction to Labor Studies. The excerpts that were made public showing the University of Missouri-St. Louis (UMSL) instructor Don Giljum and students as well as the UMKC instructor and students were definitely taken out of context, with their meaning highly distorted through splicing and editing from different times within a class period and across multiple class periods.

As stated previously, our campus supports academic freedom, civility, diversity, open discourse and the pursuit of knowledge. We support the academic freedom of faculty, staff and students at UMSL. Contrary to some reports, Don Giljum has not been fired from the campus faculty, and in fact, is completing the course; he remains eligible to teach at UMSL. We sincerely regret the distress to him and others that has been caused by the unauthorized copying, editing and distribution of the course videos.

During the past two weeks, we have received communications over a wide spectrum of viewpoints, and we appreciate people letting us know what they think. We have learned more about video and Internet technologies that can be beneficial or detrimental to positive, civil discourse, and security issues related to the use of such media. We shall explore ways to improve security in the use of electronic media for instruction, research and other activities.

Professor of Chemistry and Physics

You think the next time a right wingnut putz posts a video old media will ignore it? Not likely.

Interesting news about ACORN today – according to Salon‘s Mike Madden:

Brooklyn district attorney announced the local ACORN office there hadn’t engaged in any criminal conduct — despite the hyperventilating by Breitbart and on Fox News. And in fact, a law enforcement source told the New York Daily News, the hidden-camera tapes James O’Keefe and Hannah Giles made of themselves posing as a prostitute and her boyfriend were “edited to meet their agenda.”

Get that – the videos were “edited to meet their agenda.” In other words, these full-of-themselves rightwing echo chamber trainees, O’Keefe and  Giles, were running a scam.

The Brooklyn investigation is the third such to cast doubt on O’Keefe’s and Giles’ veracity. Investigations by the former Massachusetts Attorney, Scott Harshbarger, and the Congressional Research Service have found ACORN innocent of wrong doing. These investigations also found:

…that O’Keefe likely the broke the law in at least two states by secretly recording the videos which had voice-overs deceptively edited into them later, “in some cases substantially,” according to Harshbarger’s report, so that it was “difficult to determine the questions to which ACORN employees are responding.

What I want to know is when will Blaine Luetkemeyer and Todd Akin take formal steps to disavow the resolution they sponsored to honor “the fact-finding reporting done by Hannah Giles and James O’Keefe III in their investigation in the fraudulent and illegal practices and misuse of taxpayer dollars by the Association of Community Organization for Reform Now (ACORN).”

And, because I am an equal opportunity scold, I also want to know when Claire McCaskill will apologize for unhesitatingly taking the unverified exposé at face value in her hurry to cover her backside, declaring:

It’ll have to make your blood boil to watch those tapes and realize that people are actually thinking of helping people by giving them advice on how to evade the law. I think you’ll see this organization continue to be marginalized.

Of course, I  really can’t wait until all the newspaper and TV reporters who gleefully delivered the ugly details of O’Keefe’s and Giles smear run the story about their “editing” practices just as prominently – it’ll happen any day now, don’t ya think?