June was a very busy month. 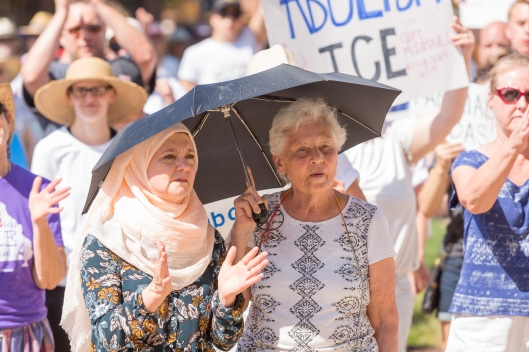 We shoot hundreds of frames when we cover an event. This image was not included in our original coverage.

Again, I learned online of an organized rally and march on immigration to be held in front of the Boone County Courthouse in Columbia, Missouri, midday on June 30, 2018. I made the drive to Columbia, arrived early, and found a parking spot north of the courthouse.

It was hot. So much so that early arrivals staked out spots in nearby building shade and under trees on the courthouse grounds.

Did I mention it was hot?

These two women were at the front of the crowd of around five hundred individuals listening and reacting to rally speakers on the courthouse steps.

Making a choice was prompted by an exchange on social media. 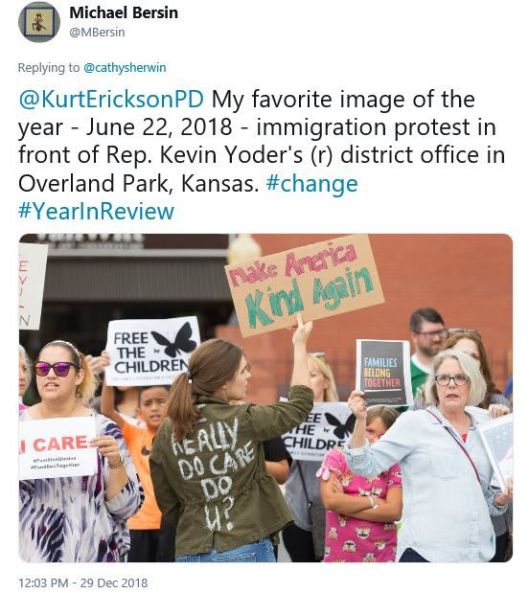 I had read online that there would be an immigration demonstration in front of Representative Kevin Yoder’s (r) district office in downtown Overland Park on the 22nd starting at 4:00 p.m. I arrived early, parked on the street at a nearby park, and walked to the district office. I had expected a handful of protesters. By the time the demonstration was at its peak there were over five hundred people picketing on the sidewalk. There were a few counter protesters, not more than a handful.

Usually protesters face the street with their signs. Early on I noted this individual with her back to the street. I took a series of images.

It was over four months to the general election, this was Johnson County, Kansas, and over five hundred people showed up. That’s when I realized Kevin Yoder’s (r) 2018 reelection campaign was in trouble.

Sharice Davids (D) is now the Representative-elect for the Third Congressional District of Kansas.

Here it is. The number of voter impersonation fraud cases documented in Missouri since 2000 is exactly zero:

Missouri has 17 cases of alleged election fraud since 2000. By category, Third Party Organizations had the highest percentage of accused at 88 percent (15 cases), followed by Voter at 12 percent (2 cases). The most prevalent fraud was Registration Fraud at 88 percent (15 cases). The status of most cases was Pleaded at 71 percent (12 cases). Responses to requests for public records varied from state to state. Some state and local officials were quick to respond by sending available records; others failed to provide a single document.

To repeal section 115.230, RSMo, and to enact in lieu thereof one new section relating to electronic voter verification systems.

Be it enacted by the General Assembly of the state of Missouri, as follows:

115.230. 1. Notwithstanding any other provision of law to the contrary, any election authority may use an electronic voter identification system or an electronic signature pad to verify a voter’s address, registration status, and signature information at any polling place. Any such system or pad shall be able to read identifying information from an official Missouri driver’s license or nondriver’s license issued by the department of revenue, and shall be capable of allowing an election authority to manually enter the voter’s information from a valid form of personal identification containing the voter’s signature.

(2) In the event that an election authority does not have an electronic device at each polling place that complies with the requirements of this subsection, the election authority shall request funding for the fees and costs necessary for purchasing and using such electronic device. All such fees and costs shall be compensated by the secretary of state with funds appropriated by the general assembly for such purpose.

And this one is with “Blue Dog” Democrats…