There is a special election in the 17th Senate District on June 5th to fill the vacancy due to Ryan Silvey’s (R) gubernatorial appointment to the Missouri Public Service Commission. The candidates are Representative Lauren Arthur (D) and Representative Kevin Corlew (R). 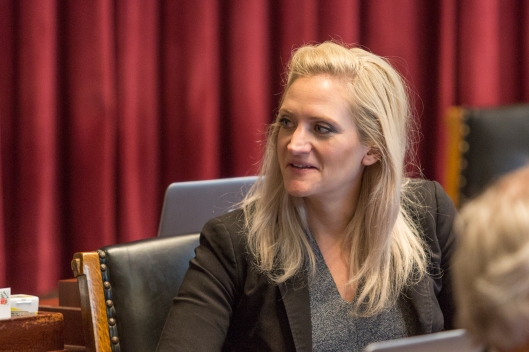 …Rep. Arthur returned home to Kansas City to join Teach for America. She worked as a middle school teacher. She taught English Language Arts at Urban Community Leadership Academy, a charter school in the urban core. During that time, Rep. Arthur earned her Masters in Education from University of Missouri – St. Louis…

…In addition to his legislative duties, Representative Corlew is an attorney. His practice involves business litigation at a law firm in Kansas City…

Since we live in the Kansas City media market we’ve been seeing a lot of television ads for this race in rotation. Apparently someone thinks Representative Arthur is an evil person. Since she was a teacher that does seem to fit into the standard narrative of the right wingnut republican universe.

…Arthur is the clear choice. She has a detailed, almost encyclopedic grasp of policy. And her stands on an array of issues align with positions this editorial board has taken, including opposition to tax cuts that favor corporations over workers, support for the Clean Missouri ethics reforms, full rights for LGBT citizens, allowing Kansas City and other cities to boost their minimum wage and common-sense gun legislation…

While also praising Kevin Corlew (faintly, and somewhat desperately, we might add) as a “moderating influence” on the republican super majority in the House the editorial can only come up with his support for increasing the state’s gas tax as a means for addressing transportation infrastructure needs as one of his significant public policy virtues. Think about that for a second. A regressive tax.

There’s a lot of money flowing into this race.

Welcome to Missouri and America in the era of Donald Trump.

We’ll see what happens next Tuesday.