South Bend, Indiana Mayor Pete Buttigieg (D) continued his presidential campaign in Iowa with an outdoor town hall on the grounds of Roosevelt High School in Des Moines on Saturday night. After his opening remarks he addressed written questions from the audience which were randomly selected from a large glass jar.

A question and answer on climate change:

Pete Buttigieg (D): Woo. Great question. I’m guessing that’s on the mind of a few people who are here. Look, we are coming up on the point of no return. Scientists tell us tell us we’ve got until 2030 before we hit the horizon of catastrophe. The real deadline isn’t 2030, it’s 2020, because if we don’t have the right kind of president now we’ll never be ready by 2030 to take those steps we’ve got to take.

So, there’s a whole bunch of things that we’ve got to do quick. We’ve got to quadruple Federal investment in renewable energy, energy storage, carbon storage. We’ve got to have a carbon price and dividend. Now, they way I would do it is, we assess a price on the cost of carbon, then we rebate it right back out to the American people with a progressive formula so most of us are more than made whole. ‘Cause it’s not about taking money out of the economy. It’s about making sure that the economy reflects the true cost of carbon. [voice: “Yeah!] Now, uh, big fan of carbon tax and dividend. I like that. [laughter] There we go.

But, look, I’m going to be honest with you, I think every one of us running for president ha a plan, as I do, to get our economy to be carbon neutral by 2050. We all do, and, of course, I think mine is the best one. But, [laughter] they all have the technical dimensions that are gonna be needed. The real question is, is any of it gonna get done. Otherwise all of our clever, elegant scientific proposals get multiplied by zero in terms of the impact they actually have. That’s one of the reasons it’s so important that we see to it that climate is a national project that everybody is part of the solution to.

That’s why we gotta tell people, some of whom have felt like they’re being clubbed over the head and told they’re the problem, and invite them to be the solution. For example, we cannot solve this problem without recruiting the energy, the support, and the creativity of America’s farmers. [….] We gotta send a message that we want climate solutions to come from America’s farm, farms in a way that we would be as proud of the quest for the carbon neutral farm as we are of solar panels and electric vehicles. And we can do it. But we’ve got to invest in it.

We can’t just tell farmers we want them to farm sustainably. If we want to unlock the potential of carbon capture in soil and covered crops and other things that we can do on America’s farms, we’ve got to invest in them. If we can find billions of dollars to pays farmers to not be able to sell their goods to China, you’re damn well sure we ought to be able to find billions of dollars in order to support farmers in leading the way to find a solution to the problem. [applause][cheers]

South Bend, Indiana Mayor Pete Buttigieg (D) continued his presidential campaign in Iowa with an outdoor town hall on the grounds of Roosevelt High School in Des Moines last night. After his opening remarks he addressed written questions from the audience which were randomly selected from a large glass jar.

A question and answer on the Electoral College:

Question: …the talk of eliminating the Electoral College seems shortsighted and fails to recognize the Great Compromise which our country was founded upon.

Pete Buttigieg (D): [….] So, look, call me simple-minded, I just think in a Democracy the best way to elect our leaders is to count up all the votes and give it to the person who got the most. [cheers]

Now, I know there’s the Great Compromise, but let’s admit that was a compromise with slavery.

And here’s the other thing, the other argument that I used to find convincing, to be honest, was that candidates wouldn’t visit certain areas if it weren’t for the Electoral College. Although, again, look at all the areas that are being cut our right now.

But here’s the other thing, when you’re electing the Governor of Iowa, right, you don’t have counties vote. People vote. And then the person who gets the most votes gets to be the governor. And I’m pretty sure that anybody who’s ever run for Governor of Iowa has gone to the big cities and they’ve gone to the small towns. Because it’s the right thing to do and it’s how you reach them.

So, I believe that’s, it, after all, it’s how we run every other election we do in this country.

And the other thing I would mention is, if you really want to think about it, this is what I’m getting at when I talk about how politics is personal. Think about how your life is different because of the Electoral College. How would your life personally change because the Electoral College exists instead of a national popular vote. And there are two big ways that your life is different.

And I just think that overruling the American people isn’t Democratic. I think we can honor the concerns of people in rural areas, in urban, big states and small, different kinds of counties and communities. But do it in a way where everybody’s vote counts exactly the same.

I just think that’s the fairest way to run an election. [cheers][applause] 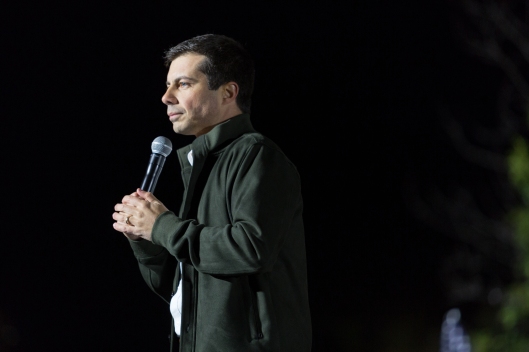 “…I have never been more convinced than I am now that our country is running out of time, but that it’s not too late. That is what this campaign I about. And we’re going to have to act fast in order to make sure that the future is better than the past…” 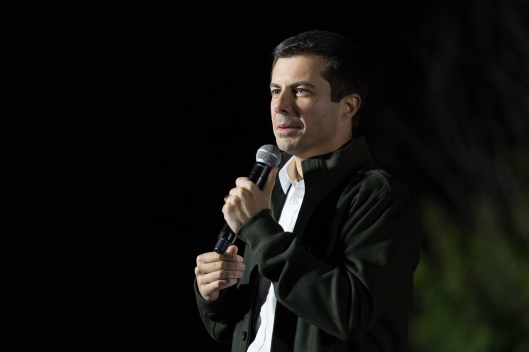 South Bend, Indiana Mayor Pete Buttigieg (D) continued his presidential campaign in Iowa with an outdoor town hall on the grounds of Roosevelt High School in Des Moines last night. The open event, with temperatures dropping into the low forties toward the end, had an audience of several hundred. Pete Buttigieg’s campaign forwarded an estimated attendance of 700. In addition to the seasonally cold temperature there was a steady wind throughout the event. 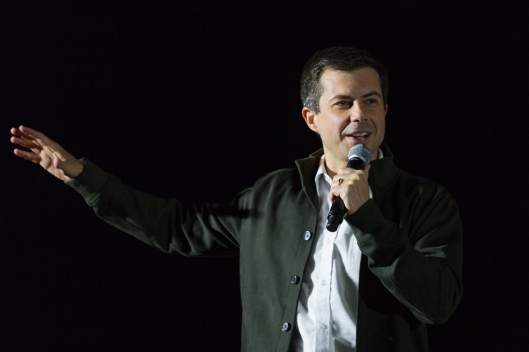 …The core falsehood of the phrase ‘make America great again’ is that there is no such thing as ‘again’ in the real world. It falls to us to make sure that the future is better than the past. And I’m asking you to join me making sure [cheers][applasue]… 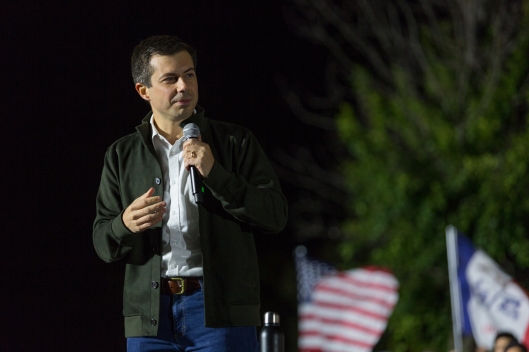 …I know what happens when decisions are made without caring about us in the middle of the country. And it’s the story of not just my community, but of my life. People in my life have been saved by Obamacare, people in my life have been lost to the opioid crisis. I’m standing in front of you as somebody who’s life was changed by the orders of an American president that sent me overseas to a war zone. And somebody who’s marriage exists by the grace of a single vote on the United State Supreme Court… 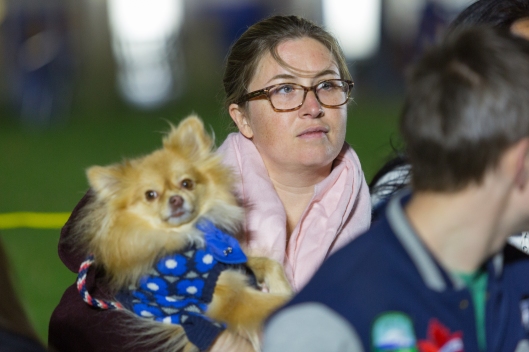 …what kind of president is America going to need after the Trump presidency comes to an end? Remember, one way or another, or the other, the Trump presidency is going to come to an end. [cheers] It’s an encouraging thought. [laughter] It’s early, but I’m asking you to stop and really think what it’s gonna be like. That first day, when dawn comes to a country after Donald Trump ha been president. Sure, it’s a relief to think about the fact that this particular kind of chaos and corruption will come to an end. But then what? Our country will be even more torn apart by politics than we are right now…

…We’re going to need a president to pick up the pieces, to turn the page, and to lead America into a future where we deal with these big challenges in front of us and are unified. We’re gonna be so exhausted from fighting and yet, we can’t give up. And we also can’t turn on each other. Think about what that will require of the American president…