What does Senator Roy Bunt and my Representative, Ann Wagner (R-2), have against me? Or should I really be asking what the Republican Party has against the people of the United States (those, that is, who aren’t billionaires)?

I’ve had a chronic illness since 2012. So far Medicare and a supplemental policy have taken care of me. However, the GOP healthcare shenanigans in which Blunt, Wagner, and their partisans indulged themselves these past months could have resulted in my supplemental policy, which pays for a big share of my expenses, being priced out of my reach.

For a while it looked like they had decided to give up and leave me be. Killing several million people with a few pen strokes is harder work than it looks – especially when those folks start calling for the heads of compliant legislators.

But my relief has been short-lived. We all should have learned by now that the folks who pay the bills for today’s GOP will never rest until the peasantry learn to live with the low expectations that characterize their cohorts in other third world countries. And obedient senechals Blunt and Wagner are no doubt already on point, along with the rest of the Missouri pack of GOP running dogs, as we used to call their ilk back in the old days of the New Left and Chairman Mao’s vastly overrated little red book.

How do I know this? There’s a legislative abomination, the Graham-Cassidy-Heller bill, that has just been introduced into the Senate and which could easily pass if the Republican leadership can drum up 51 votes – which is looking more and more likely. Named for Senators Lindsey Graham (R-S.C.), Bill Cassidy (R-La.), and Dean Heller (R-Nev.), this latest iteration of Obamacare Dump & Dupe is really, really bad: 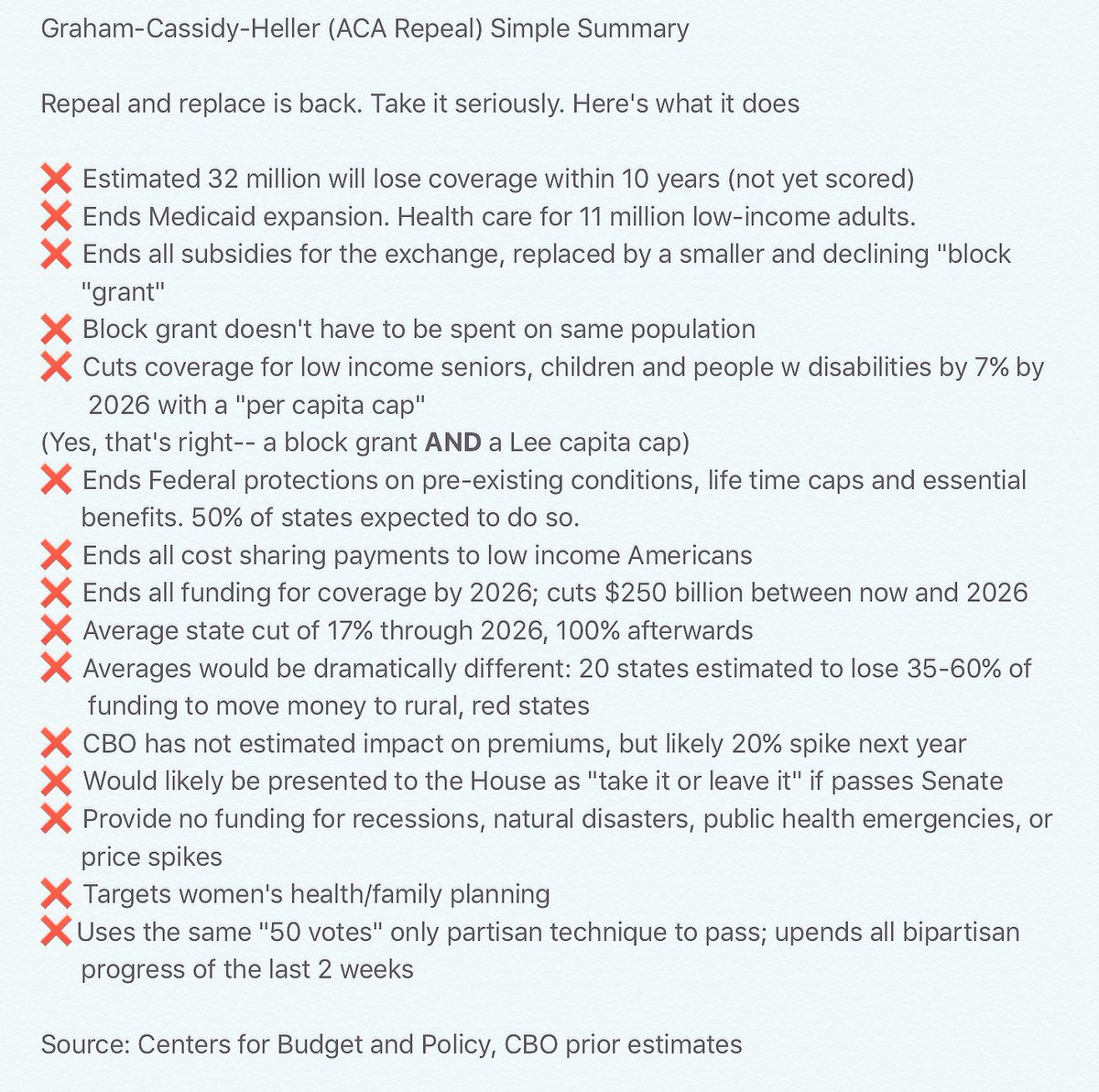 As you can see, I and my fellow preexisting conditions sufferers are not the only ones Republicans like Blunt and Wagner want to work over. Graham-Cassidy-Heller would do a job on hundreds of thousands of Missourians. And nobody is even talking (yet) about the destabilizing effect on the private insurance industry.

Pair this effort to gut Obamacare and drastically peel back healthcare funding by 2027 with the suspicion that Paul Ryan will use Trump’s tax “reform” mantra to further his goal of privatizing and ultimately crippling Medicare, and you’ve got the wherewithal to begin to finance the tax cuts GOP leaders have promised their wealthy patrons. Does anyone believe Blunt, Wagner and the Missouri GOP boyos in the House won’t go along? Even though it’ll leave folks like me out in the dead cold. And I do mean dead.

It seems like Republicans in Congress not only want to pull the healthcare rug out from under us, but kick us in oour collective ribs after we’re down. Were we getting a little too uppity what with our Obamacare and all?

But maybe I’m wrong. Maybe they don’t have it in for us. Maybe they just think we’re too dumb to notice how far they’re willing to go to give tax breaks to rich cronies.

All of which means that maybe it’s time to roll out the tumbrils again and start building that electoral guillotine – and, don’t forget, make some noise while you’re doing it: Senate Switchboard number: (202) 224-3121

Addendum: Remember how GOPers howled about how Democrats, who in reality bent over in the proverbial backwards direction to secure GOP input, rammed Obamacare down throats; well, read this and weep for what we’ve become:  Republicans go to ludicrous lengths to pass a ‘healthcare’ bill that deliberately harms blue states; (2)