The allocations for Hillary Clinton and Bernie Sanders delegates to the national convention have been made based on the vote in the primary. That distribution will not change over the length of the process. At the congressional district and state party convention levels Hillary and Bernie county level delegates will only vote for those individuals running for national delegates for their respective candidates. However, all state convention delegates will vote for Missouri’s members of the Democratic National Committee. Hold that thought.

Signing in at the county mass meeting – the first step in the Missouri Democratic Party national convention delegate selection process.

In Johnson County registered voters who voted in the primary started showing up at the mass meeting site at around 6:30 p.m. If an individual wanted to participate in the process they needed to be in the door by 7:30 p.m. By that deadline twenty-two individuals eligible to participate showed up and signed in. Twenty-two. Hold that thought.

The allocation of the total number of county level delegates is based on previous general election results in voting for the Democratic Party candidates for president and governor. Johnson County was allocated ten delegates and ten alternates to the congressional district meeting and the state party convention. Do the math. Twenty-two people, and a total of twenty delegate/alternate slots.

Further, the allocation of Hillary and Bernie local delegates from that number is based on the congressional district vote in the primary, with a 15% minimum threshold. For Johnson County that meant six delegates/six alternates for Bernie Sanders and four delegates/four alternates for Hillary Clinton. Democratic Party rules call for a strict distribution of 50% female/50% male delegates at all levels.

In practice, the odds are fairly good that a county alternate will end up being seated as a voting delegate at the congressional district meeting and the state convention. There is always attrition of delegates because of health, travel issues, etc. It’s important that those alternate slots are filled and that the alternates show up at the subsequent congressional district meeting and the state convention. 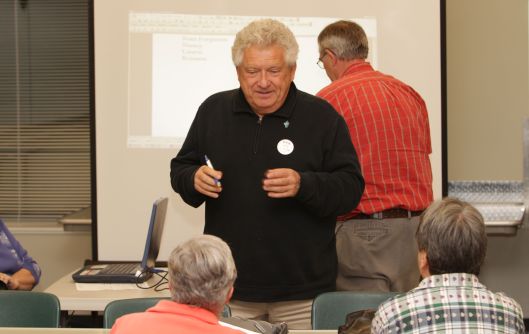 If your revolution is intent on taking over the party you’re going to have to understand the rules in place at the time of your attempted takeover. Also, it helps to show up.

One of those in attendance at the Johnson County mass meeting reported to us that another of their local friends, a supporter of Bernie Sanders, put out a call via social media for Bernie supporters to show up at the Johnson County mass meeting – informing them that if Hillary supporters didn’t show up they could take over those delegate and alternate slots allocated to Hillary. It doesn’t quite work that way. When you show up to the mass meeting you fill out and sign a Form B, pledging your support to one candidate or the other. It may be possible to flip delegate allocations in other states – that’s not exactly the case in Missouri.

Oh, and if you’re going to throw a revolution you need to show up.

If this is the state of the Bernie Sanders revolution across the state what do you think the chances are of a takeover of the state party or of flipping Missouri’s representatives on the Democratic National Committee?

I am not impressed.