So far Dave Spence’s campaign for Missouri governor has seemed like an afterthought; he actually had to resort to suing Governor Jay Nixon to get himself some media attention. Spence has, however, found himself some big GOP guns to fire off: New Jersey Gov. Chris Christie in September, and, next Monday, Wisconsin Gov. Scott Walker will try to gin up some enthusiasm for Spence at a rally in Jefferson City.

Of course Scott Walker, who is to progressives as Darth Vader is to Obi Wan Kenobi, is a hero to the anti-union right-wing, all of which ought to play well with Tea Party loving Missourians. But given that Spence is making little whining noises about supposed corruption on the part of Governor Nixon, he should perhaps think twice about the message he sends when he touts the support of a man like Scott Walker.

Walker, after all, has spent the last two years mired in a particularly nasty corruption scandal involving both local investigators and the FBI:

The wide-ranging investigation has included allegations of illegal campaign work on the public payroll, embezzlement of funds from a veterans’ charity, and even child enticement. So far, it has netted 15 felony indictments and, at this moment, three people are awaiting trial. 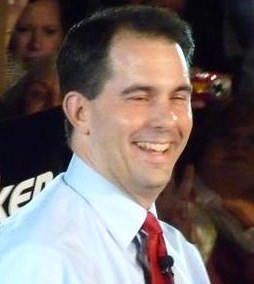 At least six of those arrested and charged with felonies are close Walker associates. Walker himself has retained two teams of lawyers, including some specializing in criminal allegations, and, it is widely speculated, may well be one of the targets of the investigation.* Makes the iffy accusations that Spence is leveling at Governor Nixon seem like mighty small potatoes.

But “Walkergate” is only the beginning. There have been reports of rampant cronyism and political payoffs under Walker:

… Republican political appointments – including wives, girlfriends, and even sons of major contributors – were given “career state leadership positions” with massive pay raises, while other public employees are forced to take giant cuts in pay, benefits, retirement, and collective bargaining rights.

The most recent Walker scandal may involve corruption or, maybe, just maybe, only incompetence. Or both. It’s still too early to tell. Soon after his election, Walker transformed the state agency responsible for economic development, the Department of Commerce, into a quasi-public agency, the Wisconsin Economic Development Corporation (WEDC), with himself as Chairman of the Board of Directors. He claimed he took this action because he wanted to streamline away the inefficiencies of ponderous state bureaucracies that conservatives always jaw on about. The outcome?:

Gov. Scott Walker called for “dramatic moves” Thursday in the wake of revelations that his flagship jobs agency had for more than a year lost track of $8 million in past due loans.

The revelation this week was just the latest embarrassment for the Wisconsin Economic Development Corporation since Walker created it after taking office last year. It is also under scrutiny from the federal Department Housing and Urban Development for failing to follow federal law and state policies in issuing economic development grants. And it was criticized for offering tax credits to a company bidding on a state contract.

Spence himself is a little tarnished about the edges. One assumes that he is probably trying to tar Jay Nixon in order to deflect attention from the charges of corruption attendant upon his tenure on the Board of Directors of Reliance Bank. Consequently,  he should be especially chary of associating himself with a figure like Walker whose administration seems to be either criminal or just criminally incompetent. Of course, these things don’t seem to really matter to most Republicans when they’re the ones who get caught.